One of the highlights of our 2013 summer road trip for my kids was where we were ending it: at Disneyland Resort. It was here that we chose to celebrate our middle son’s 8th birthday. He waited two and a half weeks on the road for this moment and what resulted was a solid smile from the moment we arrived that lasted pretty much all day.

One of the things we knew going into Disneyland was that it was going to be a smaller park to explore. With 160 acres, as opposed to Disney World’s 30,000, we were confident that our one-day park hopper would get us through most of the Disneyland Resort area.

We were driving in from Caramillo (Disneyland is a two-hour drive from Los Angeles) to Anaheim, CA early in the morning getting there shortly after the park opened. The park hopper gave us access to both the Disneyland Park and Disney California Adventure Park. Disneyland Park is the original Walt Disney theme park, built in 1955 under his supervision and guidance.

We decided to start our day at Disneyland Park, which has eight themed destinations, or lands: Main Street, U.S.A., Tomorrowland, Fantasyland, Mickey’s Toontown, Frontierland, Critter Country, New Orleans Square, and Adventureland. We spent most of our time standing in line here, taking full advantage of the Fast Pass feature available for every ticket holder. This is the “oldest” part of the park, but nothing about it felt that way. We enjoyed walking through the streets and touring the shops. We spent the latter part of our day in California Adventure Park, which is also home to the two of the newest Disney attractions: Buena Vista Street and Cars Land. There are also other areas of fun: Condor Flats, Grizzly Peak, Paradise Pier, Pacific Wharf, “A Bug’s Land” inspired by Pixar’s A Bug’s Life, and Hollywood Land. We loved Cars Land. Loved it. When we arrived the line for the ride was 90 minutes long and there were no Fast Passes available, but the boys endured. It was so worth the wait too, especially if you are a Cars fan like we are. The details in Cars Land made us giddy. It was like walking right into the movie. Visiting at night is even more fun. We were also huge fans of the boardwalk, where we rode Mickey’s Fun Wheel and California Screamin’ over and over again. We rode the rocking car in Mickey’s Fun Wheel, and I have never laughed as hard as I did then at their expressions.

Because we only had one day to enjoy the park, we made sure to stay for the long haul and got to enjoy that World of Color light show. I would recommend that you get to the site at least 40 minutes before the show as the good viewing spots get crowded really fast. This colorful, musical display of Disney favorites kept us alert and entertained, and it was beautiful to witness. The World of Color is so beautiful I would go see it again and again.

We didn’t have a chance to stay at any of the Disney resorts (though I really want to next time we visit), but there is a nice selection to choose from, three in total: Disney’s Grand Californian Hotel and Spa, the most premium accommodation, Disneyland Hotel, a classic Disney hotel, and Disney’s Paradise Pier Hotel, their boardwalk inspired hotel. Guests can also find off the park and nearby the hotels through the Disneyland website.

Though we were celebrating a birthday, we didn’t do the candle and cake thing (we reserved that for time with our family in Los Angeles), but our little boy didn’t mind. As a matter of fact, as far as birthday celebrations in Disney go, ours was really low key.  But the smile on his face was not only a sign of how happy he was, but also the greatest gift we could have gotten in turn. 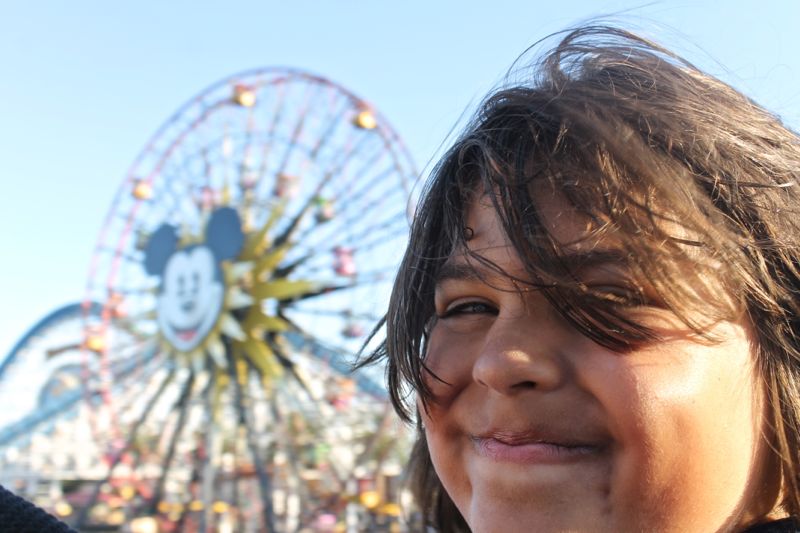 Before we left on our trip I had asked around if it was possible to tour both parks in one day and the feedback was split. I would say that if you visit during low season you will get shorter lines and see a lot more, which is not necessarily the case during the summer months. There’s always a reason to come back though. The fireworks in Disneyland Park alone are totally worth it as they change seasonally and the holiday celebrations are something special.

I wouldn’t say that we favor one park over another, because each experience has been such a unique one for us and each time we visit something new happens. But I will say we really enjoyed our Disneyland adventure and would definitely go back when visiting our West Coast family.