The fast-changing pace of New York City makes it easy for those who visit, and even some of those who live there, to miss details of its history. It’s easy to walk past a landmark and not really notice its significance for being there, or into a restaurant and not even know about events that might have taken place years, if not centuries, ago.

New York City is not the oldest city in the state – that title belongs to Albany, founded in 1614, making it the oldest settlement North of Virginia. But it’s pretty old.

New Amsterdam, which is now New York City, was settled in 1624 on Governor’s Island before moving to Manhattan a year later.

That’s a lot of time for a lot of change to happen and a lot of history to form.

There are countless museums where one can explore the past and learn more about this wonderful city.

Some of my favorite museums to learn about New York history are the Museum of the City of New York, El Museo del Barrio, and The New -York Historical Society.

In addition to awe-inspiring exhibits, The New-York Historical Society has a beautiful library with printed and digital collections of the city’s history, information that can rarely be found anywhere else. It was during a recent tour here that I learned about the strong slave trade in New York coming through the ports of Wall Street. 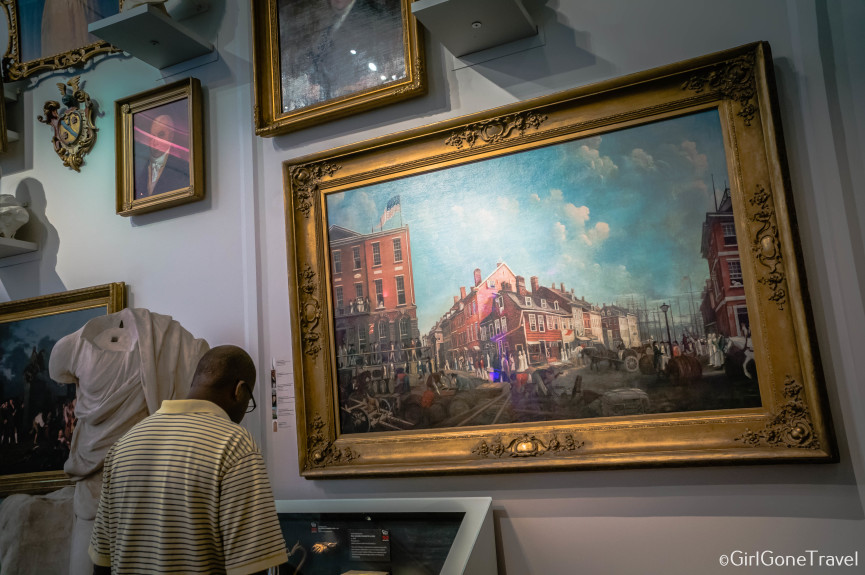 One of my favorite collections on display is the Tiffany lamps, which highlight the work of Clara Driscoll, the artisan the spearheaded many of the designs of these beloved pieces of art.

It was also here that I learned that the beloved character Madeline was a New Yorker (Madeline in New York: The Art of Ludwig Bemelmans is ongoing till October 14, 2014). This is a place where I recommend that you allow plenty of time to visit and schedule a tour so that you get a general gist of the place before touring it on your own.

I assure you, you will feel more grounded and connected to the city after a visit here.

Your experience with New York City history doesn’t have to end there.

The Park Central New York is one of the most historic hotels in the city. Back in The Roaring Twenties, this was the place to be for celebrities and politicians of the time. Built in 1927, with its name honoring the nearby Central Park, The Park Central New York is full of fun tidbits, such as the fact that Eleanor Roosevelt lived in there for three years while her New York home was being renovated. I was amused that the basement used to have a pool and during celebrations, partygoers liked to jump from the 2nd and 3rd-floor balconies into the pool. Scandalous! Because of its recent multi-million dollar renovation and modern amenities, it would be easy to overlook all of this. While cozied up in the soft beds and airy, contemporary-designed rooms, one would not even consider that this was the same place where celebrities such as Jackie Gleason, Frank Sinatra, and Mae West would come to party and rest too. That’s the kind of stuff that just makes me love New York, the places that linger on. The places that no matter how much else seems to change and disappear around us, stand tall, proud to remind us that we are visiting a special place.

My visit was part of a staycation that I was able to enjoy with my hubby. The hotel restaurant and bar is fabulous, no need to venture out if you don’t want to. The food and drinks are really, really good (try the Park Kitchen Steak and the Ahi Tuna Tacos, and pair it with any one of their 5 Boros cocktails – my favorite is the Manhattan made with Glen Thunder NYS Corn Whisky, Martini Bianco, Peach Bitters, and Sweet Pickled Baby Corn Garnish. Crazy delicious! Off the premises, my husband and I ventured to the Todd English Food Hall in the Plaza Hotel, where we indulged in their brick oven focaccia and some risotto tater tots. Todd English Food Court has gone through an enormous expansion and renovation as well. It feels more like a small in-door market, in addition to the expanded food court, and is a great place to gather with friends for small bites in the city.

The Park Central New York is across the street from Carnegie Hall, another historic New York City landmark founded in 1891, and close to many other city favorites. On a beautiful day, I recommend taking the 23-minute walk from the hotel by Central Park to the New-York Historical Society, as there is a lot more to enjoy along the way.

Disclosure: I was a media guest of the Park Central New York. All opinions are my own. You can follow this and other adventures through my Instagram at Girl Gone Travel.