Los Angeles from a New Yorker’s Point of View

I have been to Los Angeles a lot more times than I ever thought I would. When asked, I have confessed to not being its biggest fan. It is spread out and difficult to navigate. The weather is wonderful, and its got some interesting areas, but the minute I get stuck in traffic or find myself needing to load an app and search for discount codes just so that I can get to my hotel or anywhere else in the city, that little bubble of affection bursts.

Yet, I know some amazing people who live in Los Angeles. Kind, creative, funny, sweet, people who are friends and family and really, a place finds its way into your heart through the people you meet there.

So, though I was convinced that this last trip would be another where I would walk away frustrated with this city, it turned out that these people, these beautiful friends who are so giving, made it possible for me to experience Los Angeles in a totally new way.

This a short recap on how I took in the city, in many ways, for the first time.

These is mostly made up of the beach cities, so areas such as  Manhattan Beach, Hermosa Beach, Redondo Beach, and more inland cities such as El Segundo, etc. From a New Yorker’s perspective, this area looks a lot like Long Island’s beach towns. Manhattan Beach reminded me of Long Beach (not to be confused with Long Beach in LA), but a bit larger and with more to do.

People here are pretty laid back, a bit hippy, very protective of their hometown, but also welcoming of visitors as long as they don’t bring their big city ways along with them.

This was the first place I visited with my friend, and local resident, Cyd. Just walking on the sand after so many months of snow brought my spirit to life. The sun was out in full force and the wind was welcoming. I looked out into the ocean and felt a slight tug at my heart-strings. Cyd and I grabbed some guac and chips at the local watering hole, Shellback Tavern, where she instantly chatted it up with some tourists who themselves couldn’t figure out how they ended up here. She’s so California that way. I love it.

My tour didn’t end there. Cyd drove my up and down the shore pointing all sorts of areas of interests, pumping me with tons of information about every spot, historical details that for the life of me I can’t remember, and so much excitement and affection for her home that I started feeling like maybe I could love it too.

We ended our day together with a light dinner at Nelson’s overlooking Catalina Island and Point Vicente Lighthouse on the shores of Palos Verdes. Dinner was a delight and the sunset spectacular, and the company? Priceless. We promised ourselves that one day we would book a girlfriend stay in Terranea, with a balcony and ocean view and plenty of wine bottles as the sunset made me think that maybe I was wrong about Los Angeles all along.

My friend Chef Jay Terauchi took me on a foodie adventure to one of his favorite eateries (and he is a pro when it comes to eateries in Los Angeles), Din Tai Fung. Family-owned, this former oil shop from Taiwan reinvented itself when it became clear that customers couldn’t get enough of their steamed dumplings. Located in Americana at Brand, an upscale mall – one of several shopping malls in the area which reminded me of the main entrance to Disney World in Orlando, with a little bit of Vegas sprinkled in. These pork and soup, and shrimp and soup dumplings gave me life!

I probably wouldn’t have made it a point to come here, but then I would’ve missed out big time because those steamed dumplings were everything.

Or DTLA as the locals like to refer to it, was totally my scene. It was dirty enough and rough around the edges enough and eclectic enough to make me feel like I was home. The profanity ridden yell from the homeless person across the street felt like a warm hug and the various neon signs and Spanish businesses made it feel like old Times Square, circa 1980. The thing about this area is that you can sense the history here. It hasn’t been completely erased by gentrification or development. There’s a feeling of old Los Angeles that is different from other areas. It’s raw and real and I loved it. And the treasures to be found there are too many to count. I ventured here with my friend Spencer Spellman, who has embraced LA as his home and was eager to show me his favorite spots. Like Grand Central Market, which has been a staple in the community since 1917 and offers a variety of food options earning massive accolades from big wigs such as Bon Apetite. Whatever you are craving and maybe something you didn’t even think about, you will probably find here. I waited forever for Salvadoran empanadas made with cheese and sweet plantains (worth it), but around me were so many other options that showcase the diversity of the city through food. It was heavenly. Come hungry, come early, and stay awhile.

I lost my breath while walking through The Last Bookstore. No other bookstore I have ever been to compares, even my beloved Strand here in NYC. It’s home to books about everything and anything, as far as the eyes can see, and shops that sell art and trinkets, and knitting classes and book signings and so much more. There are book tunnels and library vaults, a wonderland for book, film, and music lovers. Give yourself a good few hours to explore. And because I was with Spencer, we had to make a stop into Seven Grand Whiskey Bar where he treated me to a delightful, smokey glass of Oban 14-year whiskey which I savored in a dark, velvety room which took me back to a perfect evening in Scotland with friends. The crowd was laid back and friendly and there are options for playing pool or just chilling by the bar. Just don’t wear sneakers and a cap – this is a classy joint for whiskey lovers and their most adventurous of friends. Not heavy on the touristy scene and cool in the “you-have-to-take-a-train-there” factor. I will go into more detail on this area in an upcoming feature on Expedia Viewfinder, so stay tuned. I took the train. In Los Angeles. It’s a real thing. And you can go to most main attractions and beaches in any one of the lines.

For now, I will say, on the surface it looks well-developed, modern, and clean, with shops and restaurants that might distract from the fact that this area is really where what we love about Hollywood and all its stars and glamour, started. Sculpture of Harry Culver, founder of Culver City with his wife and child.

Sony Pictures is here as one of the last surviving film studios that dominated this area back in the day. The Culver Hotel is here, a favorite among celebrities many of us loved growing up (think Gone With The Wind and Wizard of Oz). And a lot of the talent we enjoy today, be it in film or television, cross through here. It’s totally worth exploring. I learned several things from this trip to Los Angeles. One, that I have the best friends in the world. They all took time out of their busy schedules to drive me around and show me their hometown. They got me excited about it and made me appreciate it a lot more than I ever did before. Thank you Cyd, Spencer, and Jay for being such treasures.

I also learned that the beauty of Los Angeles is in its parts. Yeah, traffic still sucks and yeah, navigating it requires a language foreign to those not from there, but I think I kind of got it more. 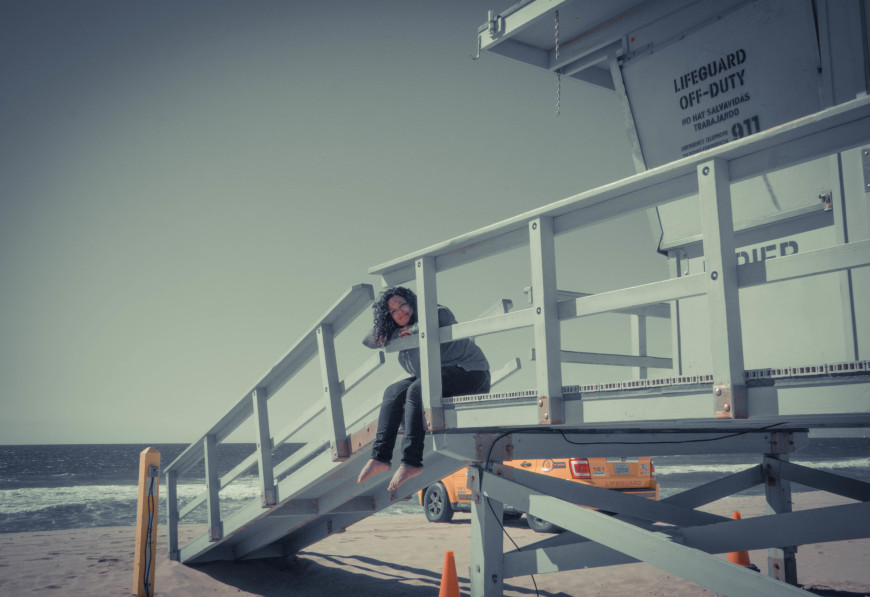 Thanks to my friends for helping me see their hometown in a way I never did before. Thanks to Cyd for this photo!

There are some nuances that I will never grasp as a New Yorker, like the time Beyoncé walked past a group of us and everyone around me lost their ever-loving minds, or the insane obsession with Uber, but there are far more things that I can really embrace, like the diversity of food and people and places. It’ll take me a few trips to really feel like I have a sense of it, but it’s nice to walk away this time around feeling a bit more connected and able to say, “You’re alright, LA.”

Five Reasons to Visit Sandusky in The Winter

Press Trip Conundrum: What do we owe in return?